Q: Are you going to be playing fast and loose with the concept of “20th Century”?

A: Guilty as charged, but hear me out. First of all, The Awakening by Kate Chopin is clearly the first 20th century novel by a woman. It just is. It sets the tone for the rest of the century. It’s a trailblazing book on all kinds of levels. But technically published in 1899.

Also, when I told my co-worker Renee about this project, the first thing she said was “Don’t forget Zadie Smith!” I agreed, Zadie Smith should definitely be in there – she is brilliant. Well, then I technically discovered that her first book, White Teeth, was published in 2000. But I think nerdier folks don’t count the new century as beginning until 2001, right? That doesn’t really give me any leeway with Kate Chopin, but maybe will give me a pass for including Zadie Smith. In any case, my 20th century is going to bleed over a couple years in either direction.

Q: So you’re really not going to collect books written by women written in other centuries?

A: While the focus of my library and blog will be women writers of the 20th century, I’ve found that when I come across interesting books from other centuries, I really want to take them home too. So while I haven’t been physically keeping them on the same shelf or digitally tracking them on the same spreadsheet…books from prior and subsequent centuries are sneaking into my general library with this project like some kind of benign Trojan horse.

Q: Are you collecting children’s books or young adult?

A: Not for this library, although I have plenty of both in my general library already. I considered it, but women have generally been equal and/or primary writers of children’s and young adult literature, so their contributions haven’t been as overlooked or “lost” in those categories. But I’m guessing there will be exceptions here and there!

Q: Are you going to collect genre fiction like romance or fantasy, or just “general” fiction?

A: Yes, although I will need lots of help! For most genre categories, I only know what the internet tells me. I have the odd Enda Ferber western or Ursula Le Guin science fiction novel already, but otherwise I’m out of my depth and will probably be spending lots of time asking friends, blog readers, and the internet for suggestions.

Q: Are you including memoirs and autobiography?

While not technically novels or short story collections (which is the focus of the library), I’ve found that memoir really can’t be disregarded, as so much of the greatest of women’s output in the 20th century falls into this category (Maya Angelou, Isak Dinesen, Maxine Hong Kingston, etc.). So I’m collecting them and writing about them, but I am at least shelving them separately!

Q: Are you going to put your whole list of books on your site?

A: Probably eventually. I’ve been toying with a couple of different ideas of how to get that out into the world, but I haven’t landed on any firm logistical solutions yet. It’s a pretty long list and only getting longer, so I want something that’s clean to look at but also easy to maintain for me…stay tuned!

Q: Hey [such-and-such book] sounds great, can I borrow it?

A: Yes, you can. Seriously! I want people to want to read books. If you’re having a hard time finding any of the books I mention and you want to borrow from my library, please contact me. Books are meant to be loved and shared 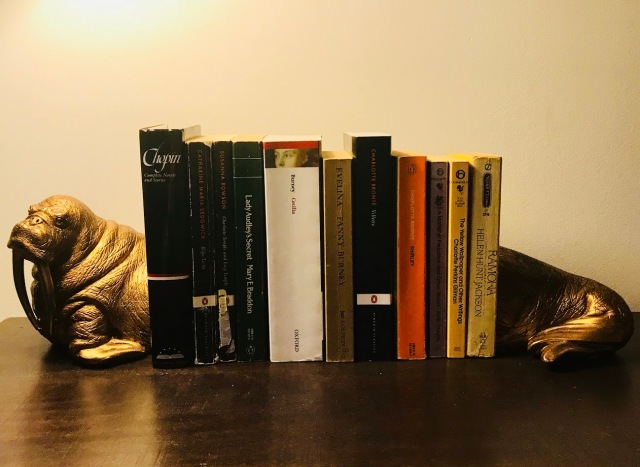