I was very intent using this blog post to continue my saga of going on and on about how wonderful Dorothy Canfield Fisher is, but then I took a road trip from Baltimore to Montgomery, AL (by way of the Florida coast) with my dad, and now all I want to talk about is Flannery O’Connor!

So I’ll wrap up my rhapsodizing by saying that Canfield Fisher is super great and, while her books can be difficult to find in any nice paper editions, it appears you can get most of them on Kindle (although I’m not a Kindle user, it looks like Amazon offers that as a purchase option).

But back to Flannery and my road trip. I took this trip with my dad with the primary goal of seeing family (in Bluffton, SC and Tallahassee, FL), and the secondary goal of seeing Civil Rights sights throughout the south. But that doesn’t mean I can’t sneak in some important literary sights and used bookstores when I get the chance! So while we were visiting my dad’s Aunt Ann and Uncle Jim (and cousins too) in South Carolina, we stopped by Savannah, which I had never visited in all my times road tripping through the south.

I had read that Flannery O’Connor’s childhood home was in Savannah and hoped to see it, having read all of her short stories last year, so my dad and I took a tour while in town. It is a really great tour and I recommend it even if you’re only a casual fan of her work. They did a wonderful job restoring the house to what it would have been like when she was living there, which means rather than it looking like a grand 1850s house, it looks like a workaday middle class 1920s house. 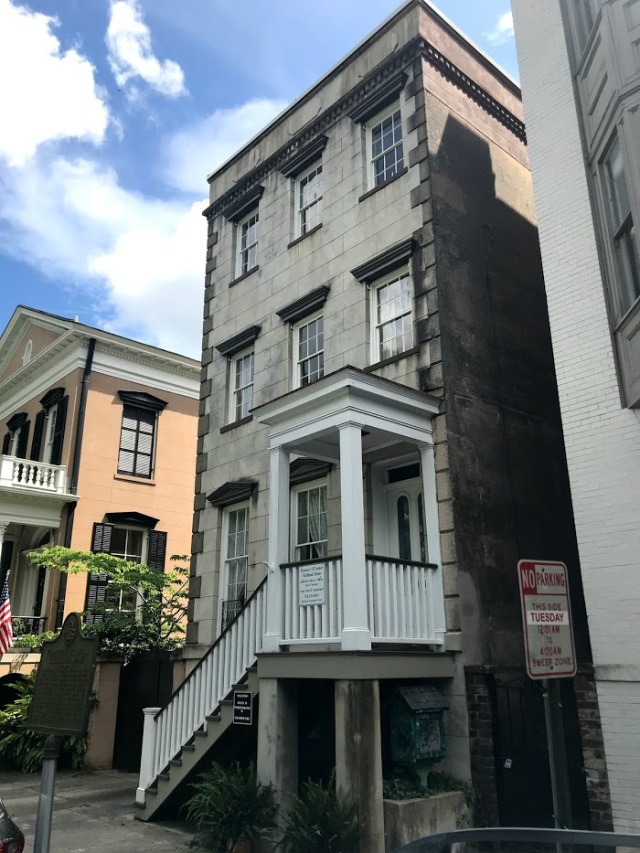 [Photo shows Flannery O’Connor’s childhood home. If you look closely, under the stairs is a “little library” that is painted with peacock feathers. For those that don’t know, Flannery kept peacocks at her farm of Andalusia in Milledgeville, GA, so peacocks are often closely associated with her.]

The tour guide mentioned that the tour is great for nostalgia, and ain’t it the truth. Everyone on the tour, it seemed, could pick out something from the kitchen or one of the other rooms that would remind them of their grandmother’s or even their great-grandmother’s house. The tour guide, Jillian, had a wonderful style and knew a lot about the house and about Flannery while still being really charming and relatable.

Everyone who worked there, actually, clearly has an affection for Flannery, for her idiosyncrasies, and for her great talent. The house is maintained with honest love, careful research, and hard work. I mean, the money comes from somewhere, clearly, but money will only take a project like that so far if there isn’t commitment from people who really believe in maintaining the property, and clearly there’s passion behind this museum. It’s really wonderful!

In addition to visiting Flannery O’Connor’s childhood house, dad also indulged my love of bookstores, and we stopped by The Book Lady, which was only a few blocks away. They had a great selection of used books, including many editions by southern authors (including O’Connor, Carson McCullers, Truman Capote, Tennessee Williams, Pat Conroy, and others), a good collection of rare and first edition books, and nice “new” used books (used copies of recent bestsellers like Where The Crawdads Sing and Sing Unburied Sing.

I fairly controlled myself (there’s not much room in the car for me to lose my head in a bookstore), but I got a first edition of an Iris Murdoch (it was pretty beat up so I could actually afford a first edition!), a novel by Bobbie Ann Mason, and two books by authors I hadn’t heard of before. Oh, and a nonfiction book by bell hooks.

I also came prepared and brought my own copy of O’Connor’s Wise Blood to read on the trip. It was a pretty quick read, so I finished it in a few days (between South Carolina and Alabama). It was extremely Flannery – funny and grotesque and tragic and a little mysterious. Recommended if you like her, and not recommended if you don’t.

She’s like raw oysters, really – you simply fall in the camp of hating raw oysters or loving them, that’s all. If you ever read her story A Good Man Is Hard to Find and hated it, then this probably isn’t the novel for you. But if you got what she was going for, then maybe Wise Blood is something you’d pick up. And if you’ve never read her short stories, I say start there first!

4 thoughts on “All About Flannery”